In 1992, Barcelona, for long an avant-garde city celebrates again its revival by hosting the first Olympic Games without any boycott for 20 years. This event was a turning point in the history of the city, and has modernized numerous infrastructure of this industrial town, to open it more and more to the world. Always modern and avant-garde Barcelona took advantage of the dynamism of the Olympic Games to revitalize its neglected waterfront, and seduce the world. Climb the hill of Montjuic to the Olympic venues, enjoy stunning views of the sea and the city, then follow the beaches to the district of Poblenou, mix of small town and flourishing modernity. Dare the longest route, you will not regret it...

NB : if unsure, check your position on the map

You prefer to get the .gpx file of this tour, directly for your smartwatch or smartphone? get it here for less than an energy bar !
Also available this tour in a shorter loop 11.3km 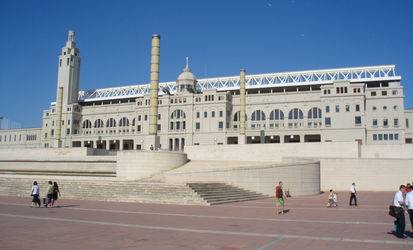 Thank you Urbirun. A new and funny way to explore Barcelona during your morning run (copied from facebook, translation from french by urbirun)

Beautiful run, and wonderful day. Congratulations for that app, and the idea. If there was another language, it would be a full success. Congratulations.
(comment posted on izi.travel, translated from italian by urbirun : Bellissima passeggiata e bellissima giornata. complimenti per l'app e l'idea. se ci fosse stata un'altra lingua sarebbe stato un successo completo. Bravissimi)

From the maze of Gothic quarter'alleys and the medieval atmosphere, to the unique modernist architec...

Let's take you to the very best of Tallin, its wonderful Old Town and the beautiful views that this tour on the h...